Why Environment is so important 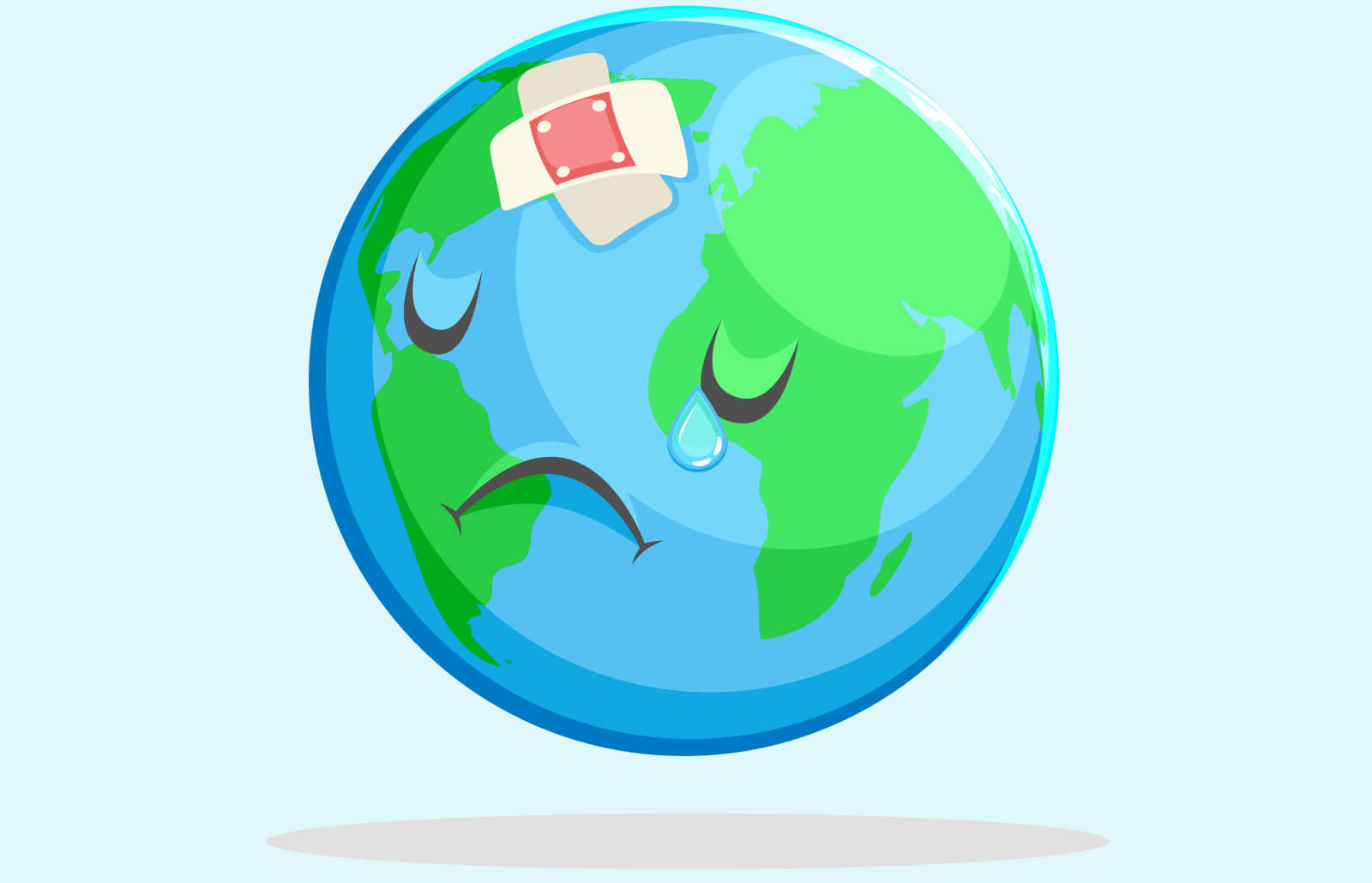 Our Mother Earth is currently facing a lot of environmental concerns. The environmental problems like global warming, acid rain, air pollution, urban sprawl, waste disposal, ozone layer depletion, water pollution, climate change and much more affect every human, animal, and nation on this planet. Over the last few decades, the exploitation of our planet and degradation of our environment have gone up at an alarming rate. As our actions have been not in favor of protecting this planet, we have seen natural disasters striking us more often in the form of flash floods, tsunamis, and cyclones.

“Sooner or later, we will have to recognise that the Earth has rights, too, to live without pollution. What mankind must know is that human beings cannot live without Mother Earth, but the planet can live without humans” ~ Evo Morales

Different environmental groups around the world play their role in educating people as to how their small actions, when combined together, can play a big role in protecting this planet. If you look at the environment around us, you can see that there are a number of issues that come to our attention. Here are 25 of the most important environmental concerns to keep an eye on today.

Air pollution is a mixture of solid particles and gases in the air. Car emissions, chemicals from factories, dust, pollen and mold spores may be suspended as particles. Ozone, a gas, is a major part of air pollution in cities. When ozone forms air pollution, it’s also called smog.

Some air pollutants are poisonous. Inhaling them can increase the chance you’ll have health problems. People with heart or lung disease, older adults and children are at greater risk from air pollution. Air pollution isn’t just outside – the air inside buildings can also be polluted and affect your health.

We all need clean water. People need it to grow crops and to operate factories, and for drinking and recreation. Fish and wildlife depend on it to survive.

Many different pollutants can harm our rivers, streams, lakes, and oceans. The three most common are soil, nutrients, and bacteria. Rain washes soil into streams and rivers. The soil can kill tiny animals and fish eggs. It can clog the gills of fish and block light, causing plants to die. Nutrients, often from fertilizers, cause problems in lakes, ponds, and reservoirs. Nitrogen and phosphorus make algae grow and can turn the water green. Bacteria, often from sewage spills, can pollute fresh or salt water.

Soil or land pollution is a result of many activities and experiment which is done by mankind. For example, industrial waste such as harmful gases and chemicals; agricultural pesticides; fertilizers; and insecticides etc. This may cause cancers including leukemia, kidney damage, headaches, eye irritation, skin rash, affect groundwater, agriculture. the animal kingdom also suffered through this land and soil pollution.Constant human activity on land forced these species to move further away and adapted to the new region, die trying to adjust.

Climate is the average weather in a place over a period of time. Climate change is the major change in temperature, rainfall, snow, or wind patterns lasting for many years. It can be caused by natural factors or by human activities. Today climate changes are occurring at an increasingly rapid rate.

Climate change can affect our health. It can lead to more heat-related illness and deaths. More pollen, mold, and air pollution. This can cause an increase in allergies, asthma, and breathing problems. Mosquitoes and other insects that carry diseases spreading to areas that used to be too cold for them.
More floods and rising sea levels. This can cause an increase in contamination of food and water.
More extreme weather events, such as hurricanes and wildfires. These can cause death, injuries, stress, and mental health problems.

Global warming is already having significant and costly effects – and these consequences will only intensify as the planet’s temperature continues to rise. This will cause the accelerating of sea level, damaging wildfire seasons, climate change, affecting human’s health and heavier precipitation and flooding.

Deforestation is the removal of a forest or stands of trees where the land is thereafter converted to a non-forest use.Deforestation occurs for multiple reasons: trees are cut down to be used for building or sold as fuel, while cleared land is used as pasture for livestock and plantation. The removal of trees without sufficient reforestation has resulted in damage to habitat, biodiversity loss, and aridity. It has adverse impacts on biosequestration of atmospheric carbon dioxide. Deforestation causes extinction, changes to climatic conditions, desertification, and displacement of populations as observed by current conditions and in the past through the fossil record.

Temperature increases, like climate change, are the consequence of human practices, including the use of greenhouse gasses. When the atmosphere changes and the heat increases, it can cause a number of problems and start to destroy the world we live in.

Genetic modification utilizing biotechnology is called genetic engineering. Genetic engineering of food brings about expanded poisons and sicknesses as qualities from a hypersensitive plant can exchange to target plant. Some of these crops can even be a threat to the world around us, as animals start to ingest the unnatural chemicals and such.

The amount of carbon in the water and the atmosphere is continuing to be a problem in the world around us. The primary effect is on shellfish and microscopic fish, and it has similar effects to osteoporosis in humans.

The current environmental concerns represent a considerable measure of danger to well-being of people and creatures. Dirty water is the greatest well-being danger of the world and poses a risk to the health and lifespan of people and animals.

The number of inhabitants in the planet is arriving at unsustainable levels as it confronts deficiency of assets like water, fuel, and food. Overpopulation is one of the most important environmental concerns. It is among the most pressing environmental issues, silently aggravating the forces behind global warming, environmental pollution, habitat loss, the sixth mass extinction, intensive farming practices and the consumption of finite natural resources, such as freshwater, arable land, and fossil fuels, at speeds faster than their rate of regeneration.

Biodiversity is yet another casualty due to the impact of human beings on the environment. It is the result of 3.5 billion years of evolution. Habitat destruction is a major cause of biodiversity loss. Habitat loss is caused by deforestation, overpopulation, pollution and global warming.

The over utilization of assets and formation of plastics are making a worldwide emergency of waste transfer. Developed nations are infamous for creating an unreasonable measure of waste or junk and dumping their waste in the seas and, less created nations.

The ozone layer is an undetectable layer of protection around the planet that secures us from the sun’s unsafe beams. Depletion of the critical Ozone layer of the air is credited to contamination brought about by Bromide and Chlorine found in Chloroform carbons (CFC’s). When these poisonous gasses each the upper parts of the atmosphere, they cause a gap in the ozone layer, the greatest of which is over the Antarctic.

Mining results in extraction of minerals from earth’s core. These minerals also bring out harmful chemicals from deep inside the earth to the earth’s surface. The toxic emissions from mining can cause air, water and soil pollution.

Non-renewable resources are limited and will get expired one day. Consumption of fossil fuels at an alarming rate can lead to global warming which can further result in melting of polar ice caps and increase in sea levels.

Natural disasters like earthquakes, floods, tsunamis, cyclones, volcanic eruption can be unpredictable, devastating and can cause irreparable damage. They can cause huge loss of life and property ……….

Human overpopulation is prompting the elimination of species and environmental surroundings and the loss of various bio-mes. Environmental frameworks, which took a huge number of years to come into being, are in risk when any species populace is huge.

Acid rain happens because of the vicinity of specific poisons in the climate. Corrosive downpour might be brought about because of use of fossil fuels or volcanoes or spoiling vegetation which discharge sulfur dioxide and nitrogen oxides into the air.

Modern day agriculture practices make use of chemical products like pesticides and fertilizers to deal with local pests. Some of the chemicals when sprayed do not disappear and, infact, seeps into the ground and thereby harms plants and crops. Also, contaminated water is used for irrigation by farmers due to disposal of industrial and agricultural waste in local water bodies.

Noise pollution is another common form of pollution that causes temporary disruption when there is excessive amount of unpleasant noise. Construction activities, industrialization, increase in vehicular traffic, lack of urban planning are few of the causes of noise pollution.

Medical waste is any kind of waste that is produced in large quantity by healthcare centers like hospitals, nursing homes, dental clinics and is considered to be of a bio-hazardous nature. The waste can include needles, syringes, gloves, tubes, blades, blood, body parts and many more.

Littering simply means disposal of piece of garbage or debris improperly or at wrong location usually on the ground instead of disposing them at trash container or recycling bin. Littering can cause huge environmental and economic impact in the form of spending millions of dollars to clean the garbage of road that pollute the clean air.

Landfills on the other hand are nothing but huge garbage dumps that make the city look ugly and produce toxic gases that could prove fatal for humans and animals. Landfills are generated due to large amount of waste that is generated by households, industries and healthcare centers everyday.

Mindfulness based Training for Workplace

Do you want to become Mindfulness Trainer?  Join this global certification program

To Get Information about Program Fill in Below details