11 Signs that you have of Toxic Boss 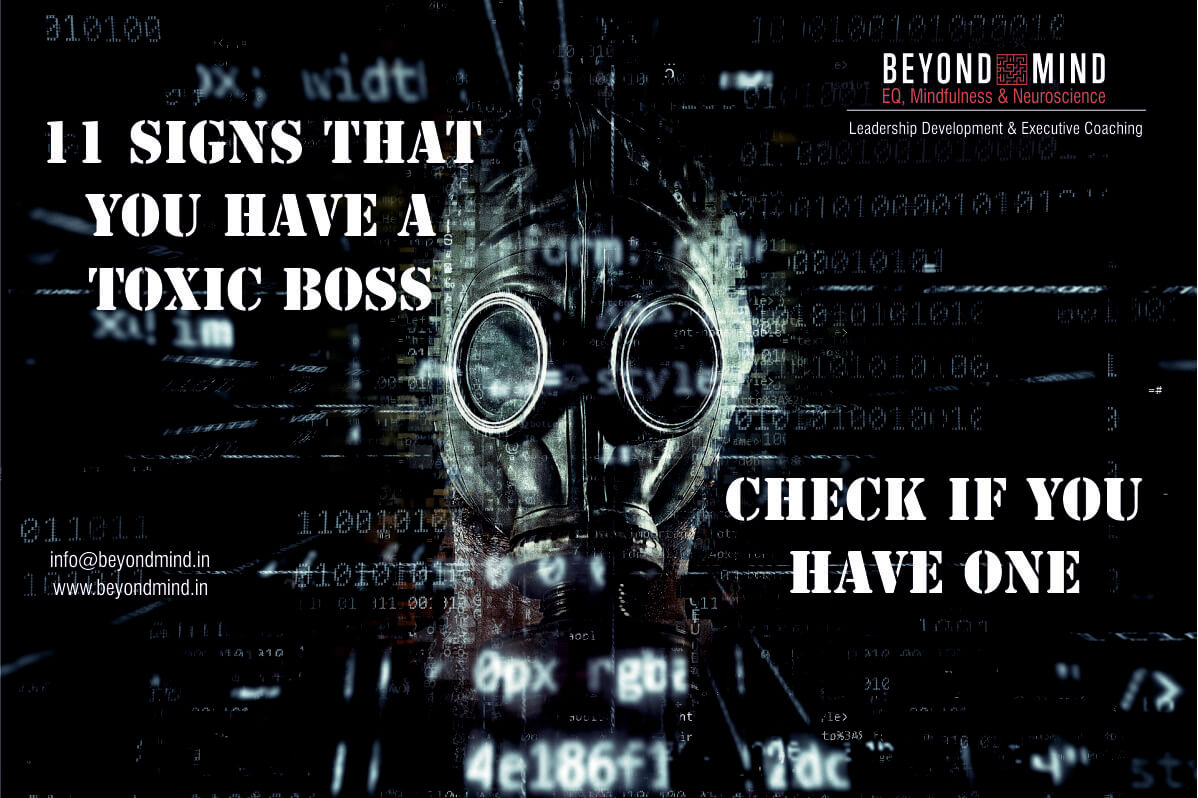 One morning, I came across a tweet “Hidden reason why employees leave” from well know Indian industrialist Harsh Goenka. The first point was “Loss of trust and confidence in bosses” and he was bang on correct. It also reaffirms our belief that successful owners and stakeholder do understand the role of leadership and culture very well.

In my view and experience, good people leave because bosses are Toxic.

Check out below points and evaluate if your boss is toxic or not?

The first sign of toxic boss is they create or give you target or task which is nearly impossible. They also refuse to extend support other than what is available for you to prove yourself.  You can’t reason as you are deemed a loser and there is no place for losers in the organization.

2. They are always right

A common quality also called Mr. Know All, they seemingly have knowledge and answer for everything. Having “been there done that” they surround themselves with yay men – “How great you are” who keep massaging ego by validating their ideas. They blame others for mistakes and take credit of good work. Furthermore, whoever disagrees goes to proverbial gas chamber.

They are insecure and spend time in managing their own bosses by massaging their egos. Easily threatened by team members or peers, they enjoy humiliating or punishing people. Scared to be treated in similar manner in future, they create offence as best defence. They hate and are terrified by success of their peers.

4.They have their coterie

Playing partisan and fostering specific kind of people around them helps them create a core group or coterie. They mostly favor people / employees who agree with them.  Resources are extended only to favorites. In turn, favorites are Mini Me’s and in absence of the toxic boss they start imitating his behavior.

5.One is never good enough

Work accomplished will go unnoticed and unrecognized. One may find that whatever one does is not good enough and there is always some fault in work. In most cases example is drawn how they or someone else has could have done better.

One’s performance is not acknowledged and appreciated. Although one’s caliber is known and understood, they refuse to accept, appreciate or give deserved promotions or credit. There is lack of interest in one’s growth.

7.They steal your work

Another annoying quality is when one’s work is ruthlessly passed onto seniors as someone else’s work. Many times, presenter then credits the toxic boss. Interestingly one is then kept away or not invited to such meetings

Shouting, yelling, anger and language are other signs of toxic bosses. The attitude is loaded with ego and arrogance of position. Uninterested in team growth, they use verbal and non-verbal body language to annoy and insult in front of others.

“Unforgiveness and Revenge are their driving forces”

They continuously create conflicts within people to control the system. Any collaboration and partnerships are frowned upon and they relish in the policy “Divide and Rule”

Many toxic bosses have integrity issues too. Being partisan, they promote their own people or vendors in the organization. One’s honesty becomes a problem as one is not part of the philosophy that permeates the environment. They create situations or rumors to build negative perceptions and malign character.

11.They have unpredictable emotions and Behavior

They behave differently with people depending on position, status or time. Being highly unpredictable, they are sometimes good and sometime very difficult. On some occasions they behave so good that one doesn’t believe and when one gets comfortable, they hit hard.

“Constructive feedback is a no-no as it upsets them”

If any person or boss has least 4 of above qualities than he can be defined as a Toxic Boss. Not only will he disturb Mental, Emotional and Physical balance for teams but also eventually spoil the enterprise and business for his own benefit.

What to do and how to deal with them?

The biggest mistake one makes is to feel like a victim and reciprocate similar treatment that eventually does not work.

Toxic people are low in EQ (emotional intelligence) and hence unable to observe their negative behavior. Even in self-reflection their ego justifies their negative actions.

In most case you can’t change such people unless they realize the damage they are doing to others, organization and most of it to themselves.

You will be surprised with the solution I am going to suggest – Practicing Emotional intelligence based Mindfulness and behavior intelligence tools.

Empathetic Mindfulness and Emotional alertness  are the biggest tool for practicing Self-awareness and Self-Management. Learning these would completely change life as it gives an ability and knowledge to remain in the moment and PAUSE reaction time.

“With this added muscle in ones brain, one see himself in a slower motion. The intended action is then broken down  into multiple frames like onion skin. This increases mental alertness which in-turn prevents an autopilot reaction”

One remains in control and do not imitate revengeful reaction.

A good mindfulness coach and emotional intelligence training organization can really help to build mindful aptitude, which can prevent people and organization from going down and recover back on the tracks of success.

Please read more about these techniques in my other articles on my website www.beyondmind.in

Just one toxic boss can sink a business if allowed to continue with his lethal behavior.

It’s encouraging to see new age business leader like Harsh Goenka is aware of such problem and I am sure he is taking necessary steps to help his employees. Taking a leaf out of the learning from him, other new age businesses would incorporate mindful practices in the organization.

About the author Manish Behl is a Mindfulness & Leadership coach, social entrepreneur with background in business and leadership. Writer Manish Behl is the founder of “Beyondmind” and Braincloud India. As a professional executive coach he creates Mindfulness and Emotional Intelligence based solutions for individuals and organizations on leadership, performance, resilience, and well-being. With over 25 years of leadership experience in the corporate world, he works on empowerment of professionals, individuals, and corporates through groundbreaking practices on leadership through mindfulness and leadership training and coaching.

An author who has extensively studied and developed transformational life practices which are life-changing and allows one to see their inner self, invoke positive thinking, augment neurological & transcendent energies and ability to connect with hyper-intelligence.Top of FormBottom of Form

Beyond Mind is a coaching, training and learning company providing leadership and performance solutions for corporates and organizations.

With collective experience of over 200 years, our coaches and facilitators has extensive practical experience in solving leadership and team issues which they draw upon in their work for clients.

We empower you with experiences that intensify focus, manage stress, harness creativity and improve resilience. Expediting the birth of new mindsets and engaging behaviors at all the levels.

Contact BeyondMind to learn more about how to become Successful.